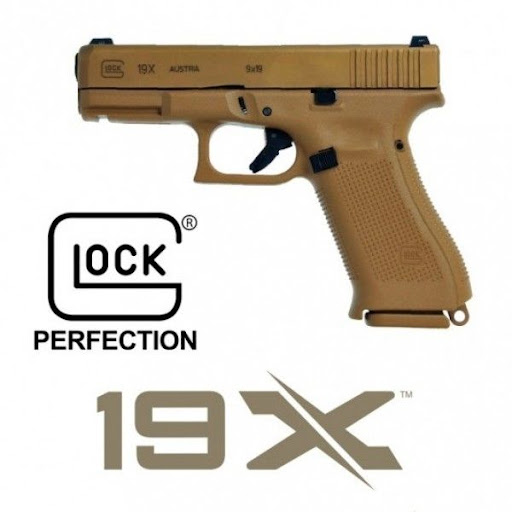 Special version derived from the model developed for the MHS program. This model has a Glock 19 breech and barrel and a Glock 17 casing. The color of the breech is obtained by an nPVD coating (vapor deposition on nitriding) which gives it a very high resistance to wear. and corrosion.

We have placed the G19X in the Gen5 category although it is a separate model because it has many points in common with this generation unlike previous generations: same new Marksman barrel, same trigger system, no fingerprints on the carcass , same finishing technology, same cylinder head profile, ambidextrous cylinder head retainer, etc ...

The 5th generation of Glock pistols, derived from the model adopted by the FBI, feature the following improvements:

- a new match-quality cannon potentially capable of twice the accuracy of before.

- a new finish of the breech and the barrel made up of an nDLC protection (nitriding + Amorphous Diamond Carbon), with the exception of the G19X whose breech is protected by an nPVD coating.

- a flared magazine well integrated into the frame to facilitate magazine changes (except G26 and G19X).

- a profile of the front of the cylinder head similar to that of the Glock 26.

- the grip no longer has fingerprints, therefore it is suitable for the hand of a greater majority of shooters regardless of the size of their fingers.

- the firing pin safety, the trigger and the trigger unit including the ejector have been modified in order to soften the trigger.

- the new magazine features an orange riser and a slightly oversized magazine stub (the pistol remains compatible with all old Glock magazines), except for the Glock 19X which comes with 3 magazines to match the color of the carcass.

The above list is not exhaustive because more than 20 modifications have been made to this weapon.

- exceptional protection against corrosion and wear thanks to the new nDLC finish (and nPVD for the cylinder head of the G19X).